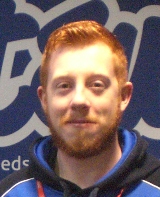 I think my time as VP in general has been a highlight as I've been able to lead the direction of an organisation.

After completing my undergraduate course in Primary Physical Education and Sports Development in 2013 I stayed on at Leeds Trinity for two extra years as Vice President (VP) of the Students’ Union. Why I ran for the Vice-President role (twice!)

During my time as an undergraduate, I worked as bar supervisor in HQ and The Lounge (three years), so was heavily involved with the student scene and the social side of the Students' Union. As I came to Leeds Trinity when I was 20, I already had a few years on most of my peers, so was ready to get stuck into work and as I had done most of the partying when I was 18, I wasn't bothered about trying to continue that on. Instead I wanted to make a difference, and create lots of memories for students, whilst also showing them that a Students' Union is about much more than just going to Leeds nightclubs and a mid-week quiz - and thankfully I achieved that.

My highlights during my time as VP

I think my time as VP in general has been a highlight as was able to lead the direction of an organisation, alongside Miki Vyse, re-build a Students' Union, watch Leeds Trinity University change and grow, but from a staff perspective rather than seeing it from a student point-of-view.

However, I think Freshers' Week 2014 has to be my proudest moment, as I organised the biggest line up to ever be hosted at Leeds Trinity University, but it was also the biggest line up in the country at the time. I managed to bring The Loveable Rogues, Mike Dignam, Tim Westwood, Chris Ramsey, Scouting For Girls (pictured below), Huw Stephens, and Kristian Nairn (Hodor from Game of Thrones) to campus all in one week and Scouting For Girls was actually an outdoor concert so provided that 'mini festival' feel for the students. Usually, this is where I would tell a funny story, but to be honest I think rather than amusing, my happiest memory (and this is cheesy) is seeing the reactions to having guest acts and events on site, as they become overwhelmed with excitement and are always so thankful and it's really nice to be able to give them that moment as you see all the stress from university life disappear, and they just have a good time.

I think that with Leeds Trinity being such a small university, students often think that these acts or events will never come here but I'm glad that I've been able to change that and have hopefully set the trend for years to come, as although we're small in size, we can still pack a punch.

My career after leaving Leeds Trinity

As a Sport, Health and Nutrition graduate I had a Sports Coaching role with Omagh District Council lined up after five years at Leeds Trinity. I also secured some part-time and boot camp work.

My advice for other sabbatical officers

It's important to enjoy your time as Vice President because if you don't then your heart won't be in it, and this is a job where you need to be 100% committed, or else the students will catch on to you very quickly. Even though you're in the role to give the students as much as you can, remember to think of yourself also, and what opportunities you can create, because this isn't a job that's guaranteed for two years (due to being an elected role), and it flies by, so you really want to come out the other end with a heavily weighted CV for employers to fight over.