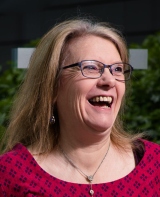 The MA prepares you for so much more than just being a published author.

The inspiration behind my writing

I was one of those kids at school who wrote excessively long stories in the style of The Famous Five with spiral staircases and dungeons and remote islands. So, I think it would be fair to say my love of reading sparked off my writing.

Wanting to become a writer

Growing up as a working-class girl from a small Scottish village and being the first from my family to even consider university, writing was never really a career option for me. I enjoyed it as a hobby but felt that teaching was the way to go for me and something concrete and not airy fairy like writing. I got to a point in my life where I had approached many agents and publishers and had received a lot of very positively worded rejections. Then I became incapacitated with Mental health issues. As I began to improve, I happened to see an advert for the MA whilst accompanying my daughter to Leeds Trinity for a Psychology Open Day. I recognised one of the tutors, Martyn Bedford, having read his novel Houdini Girl and that gave me the confidence to talk to him at Leeds Trinity’s Writers’ Day.

My MA experience at Leeds Trinity

The MA gave me the structure and routine which I needed to focus on my writing. But more than that it provided me with a writing community that I still am involved with today. Instead of working in isolation, I was part of something wider and the shared experience with like-minded people was invaluable. The ups and down of being a writer, with all the self-doubt and head bashing are put into perspective now because I can share them. The MA also taught me that, for me personally, I enjoyed and responded to the challenge of working academically and creatively. The synergy between the two works for me and I love it.

The MA made me more confident in myself and it provided me with life-long friends. Professionally, the structure and input of the MA made it possible for me to submit my work to agents and publishers and I was lucky enough to be taken up by a growing independent publisher called Bloodhound Books. The book I worked on during the MA became my first published novel, Unquiet Souls and the book I began for my Dissertation became book two in the series, Uncoiled Lies. Getting my distinction at Leeds Trinity and getting a special shout out during the graduation ceremony was amazing. That was such a special day for me. Getting my first two book deal was fabulous. I could hardly believe that in my 50s I’d finally managed to do it. Being invited to be one of the spotlighted authors at Bloody Scotland Crime festival was frightening but I was so proud. It was in Stirling and that’s where I initially went to University so I was doubly pleased.

I've had three books in a new series featuring DS Nikki Parekh published by Harper Collins (HQ Digital) too - that is a mainstream publisher and is a real dream come true for me.

My style of writing

I write crime fiction police procedurals set in Bradford. My writing is dark and gritty. It looks at the darker aspects of life, turns over the underbelly and makes it visible. I like to prod at things and challenge the status quo. I like to think that through my writing I represent a diverse range of characters in non-stereotypical ways.

Go for it! I’m not saying you need an MA to get published or to be a good writer, but it does help you to focus on your writing and it certainly raises your game. The focus of studying for the MA made me able to finish the novel and have it ready to go out into the wider world.

The MA prepares you for so much more than just being a published author though. It helps with your performance, it demonstrates all the other ways you can be employed in the creative world, from teaching creative writing, to organising events, to blogging, e-zining and more. Most importantly it allows you to meet and learn from writers who are writing in a different genre from yourself.