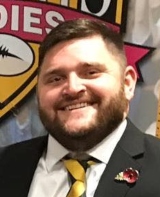 With the Leeds Trinity campus being so small, it provided a real strong sense of community amongst staff and students alike, and that made that scary move away from home so much easier.

I chose to attend Leeds Trinity after visiting an open day in late 2005 when I was deciding my next steps after sixth form. I loved the place right from the off - everybody was very welcoming, and the fact that the whole course was taught on one close-knit campus really suited my needs.

My best memories from my time as a student

I was really lucky to enjoy four incredible years at Leeds Trinity, with so many memorable experiences along the way! Getting involved in all the fun of Fresher’s weeks, end of season awards dinners for the rugby team, watching International Cricket at Headingley with lecturer Dean Naidoo was a particular highlight, but the best memory of all has to be receiving my degree from the legendary Freda Bridge at the graduation ceremony!

The challenges I've had to overcome

There were a few challenges I had to overcome along the way. When I was 14 years old I suffered a C4 Spinal Injury after a mountain biking accident and became paralysed from the chest down. Leaving home and moving to university was a scary prospect, but everyone at Leeds Trinity was absolutely incredible from day one - the support network available to students was fantastic – I need to give special mentions to Judith Atkinson, Emma Quirke, Lucie Dodd and the weekly tea and cake on the landing with Father Paul!

With the Leeds Trinity campus being so small, it provided a real strong sense of community amongst staff and students alike, and that made that scary move away from home so much easier. I really grew as a person over the next four years - something I will be eternally grateful to Leeds Trinity for.

What I took away from my time at Leeds Trinity

My time at Leeds Trinity - both on the course and socially - gave me the perfect grounding for my future career and adult life. The course gave me an excellent understanding of the Sports Journalism industry, and my lecturers gave me some valuable lessons and advice as well as setting me up with some fantastic work experience opportunities at the Rugby Football League governing body and the York Press newspaper. Getting involved in University life

Away from the course, one of the best things I did at Leeds Trinity was join the Rugby League team. As well as giving me experience in running media operations for a sports team, I also ended up making a number of friends for life and enjoying plenty of nights I won’t forget (and even more I don’t remember) - Up the Titans!

As well as joining the Titans, I was also lucky enough to be elected as Sports & Societies Secretary for Leeds Trinity Students’ Union during my third year. It was a wonderful opportunity to help out all the excellent sports and social groups at the University, in addition to providing me with crucial experience at committee level.

My career since graduating

Since graduating in 2010, my career to date has been hugely exciting. I spent seven years working as a Yorkshire Correspondent for LoveRugbyLeague.com, helping establish the website from its humble beginnings to one of the most popular Rugby League news websites in the northern hemisphere. From there I got the call in January 2017 to become Media Manager for York City Knights, who had just been taken over by new management. I have supported York RL all my life, so this job opportunity was literally a dream come true for me!

The club has come on leaps and bounds in the last three years and went from the brink of extinction at the end of 2016, to beating the mighty Bradford Bulls to the League 1 title in 2018. This was also the year the Knights earnt their highest ever finish - an incredible third place in the 2019 Championship - the highest UK placed team outside the Super League!

From a personal point of view, winning the 2018 Club Person of the Year award at the Knights end of season bash was an immensely proud moment for me. After the unbelievable year the club had, to be recognised for playing a part in that with my media management and fan engagement in front of a packed room at York Racecourse, including BBC’s Harry Gration, my family & fiancé Alice (we get married in 2020), was something I will never forget.

My advice to a prospective student considering a course at Leeds Trinity would be to go for it! I’m pretty sure it will be one of the best decisions you could ever make - on both a personal and professional level. The campus community is second to none, the incredible city of Leeds is right on your doorstep, and you will definitely make some friends for life!​