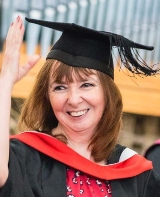 My journey began in 2012 after taking my daughter, Helen, to an open day. I liked it so much that after being shown round the TV studio, I enquired about the TV Production degree at Leeds Trinity myself!

Why I chose to study at Leeds Trinity

My journey began in 2012 after taking my daughter, Helen, to an open day. I liked it so much that after being shown round the TV studio, I enquired about the TV Production degree at Leeds Trinity myself! Helen went on to study Psychology in 2013 and I followed a year later in 2014 after being made redundant. Graduating in the same week as my daughter

As fate would have it Helen and I graduated within a few days of each other and it was great to get some photographs of being gowned up together. It was just fantastic to share such a special moment with my daughter. It really was the best day!

Returning to study at MA level

After graduating with a First Class Degree I returned to campus in November 2017 to commence a Masters by Research postgraduate degree. I decided to continue to do a Masters Degree for several reasons; I didn’t want to leave Leeds Trinity as I loved it there and everyone I had met, It’s a massive achievement and I’d be doing research into the future of portrait photography, from a creative point of view, which is so relevant to my business interests.

Being on campus without my daughter Helen

I really missed Helen being on campus too the second time around. Even though our timetables had rarely coincided previously, just to know she was there was just so good. Plus I would often stay overnight with her so we got to spend more time together.

Phil Williams and the Enterprise Centre were incredibly supportive and encouraging in my business development for CW Media Productions (pet photography). The start up grant I received enabled me to purchase backdrops and marketing materials and being introduced to experts including an accountant, solicitor, marketing specialist and a website developer. All these professionals gave me so much valuable advice. My interest in funeral photography originated whilst researching about the future of professional portrait photography at Leeds Trinity University. It identified it as a new genre for professional photographers which could replace weddings as the most significant social event for families.

I have found that families could not recall who attended to celebrate the life of their loved one, would not remember the floral tributes or messages, and it may be an opportunity for families to get together. They could also be shared with those unable to attend and be passed down for future generations as part of their family history. It is also an opportunity to reminisce.

During the Covid pandemic where attendance at Crematoriums and Gravesides was restricted from zero in March 2020 to thirty in November 2020, images of the funeral service, committal/burial could be considered to be an essential contributor to grieving. They could also be shared with those unable to attend, and give closure for others, to enable them to move on with their lives.

The Funniest thing happened when I had been filming 8 dogs for a rescue video – Healing Paws Rescue – which was about a Greek Rescue – and one of the dogs cocked his leg up me!!