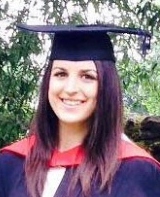 I am very fortunate to have a career which I love and am very passionate about. Leeds Trinity was definitely a key part in starting my journey to where I am now.

I was looking for a course that supported my career aspirations and that also had a variety of career pathways. I attended open ​days at a number of universities, however Leeds Trinity is the only one that ‘felt right.’ I loved the feel of the university in the sense that it was smaller, and the whole experience seemed very personal and individual to each student, plus the fact that tutors knew your name, and not your student number. I was a pretty shy individual back then so it fitted me perfectly. It’s safe to say that Leeds Trinity really helped to bring me out of my shell and I’m definitely not so shy anymore!

My most memorable experiences from my time studying at Leeds Trinity

I was heavily involved in the netball squad throughout my time at Leeds Trinity, playing in the second team for my first year, then making the first team and becoming captain in my final year. My experiences played a massive part of my degree, the memories I made, and have actually benefitted me with my career now as a netball coach and sports teacher. I also chose to go to a university where I didn’t know anyone, nobody in my friendship circle were considering LTU and it was quite intimidating at first, however I quickly became close friends with a number of people and I am still close with these people today. I’d say one of the biggest barriers I had to face was with myself, as I’ve said above, I was pretty quiet, low on confidence and never believed in myself as much as I should have. I put myself in a situation where I was out of my comfort zone, new city, new surroundings, new people, but I was confident that this was the right course and the right university for me to enable me to be where I am today. Leeds Trinity proved exactly that, in the support they offered and extra opportunities that were made available to us to further enhance our experience and skill set to increase not only our employability skills, but also our enjoyment and aspirations.

Preparing me for my career

I chose to study BA(Hons) Sport Development and Physical Education with the goal of becoming a sports teacher. The units were varied and purposeful to enable us to gain knowledge of different areas within sport. The placement I undertook was also useful as originally I had wanted to work in a secondary school and, although I enjoyed it, I realised that wasn’t for me which now shows as I work for Barnsley College delivering to ages 16+. During my final year I was appointed Clubs and Societies Officer for the Students’ Union, and I was also involved with the netball squad which, in any sporting environment, develops so many skills without you even realising. I was, and still am, very passionate about netball and being involved in the squad at LTU increased my confidence, along with many other skills to utilise within my coaching and teaching roles now.

I am currently a sports teacher for FE sport courses and the HE provision delivering on foundation degrees which are validated through Leeds Trinity. It is nice that I can still have some links with Trinity, even if it has been a few years since I graduated! I am also a performance coach for Leeds Rhinos Netball U13 and U15 Academy, South Yorkshire Netball, and Dronfield Netball Club. I am very fortunate to have a career which I love and am very passionate about. Leeds Trinity was definitely a key part in starting my journey to where I am now.

I would have to say my most recent highlight, in May 2019, was winning the ‘Teacher of the Year’ at the Yorkshire Netball Regional Awards as recognition for going above and beyond my responsibilities to develop netball within Barnsley College. We have also recently established a partnership with Leeds Rhinos Netball to create a pathway for players at the college to progress with their netball alongside their academic studies and it has also allowed progression for myself to further develop my coaching skills to deliver an even better standard of sessions and pathways for the students and players I am lucky enough to work with. I recently had the pleasure of meeting Tracey Neville (former England player and former England Coach) at the Leeds Rhinos Sportswoman’s Dinner! DO IT! Some of my best memories were made at Leeds Trinity and I honestly would go back and do it all over again if I could. Get involved with as much as you can as it only makes it even more enjoyable and ultimately gives you so much experience that you can use in any career pathway you choose to take afterwards. It is such a welcoming environment to be in and you feel like you belong, which I think is massively important!