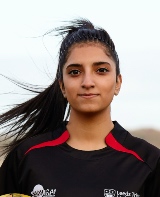 From volunteering with Kick It Out, my passion for equality and diversity grew even more.

I discovered Leeds Trinity University through clearing when I didn’t get the exact results I’d hoped for. When searching for universities, one thing that I liked about Leeds Trinity was that it was campus-based and smaller than the others I’d looked at. I liked this aspect as it meant I would be able to have real conversations with the lecturers and peers and seek support more readily. Also, it was really important to me that my course was accredited by the BPS as it provided a pathway into the field I wanted to go into.

The benefits of my placements, including volunteering in South Africa

During my first year at university, I completed a five week placement with a taekwondo club as a performance analyst. This was a great experience as I knew nothing about the sport so it was a good opportunity to test how I would handle an unknown situation. By keeping a really good line of communication with the club and building strong rapports with the athletes and coaches, I successfully created performance profiles for some of the club’s most talented athletes from a competition, which was used to improve performance in future competitions. This allowed me to transfer skills that I had learnt from some of my modules, specifically research methods and sport.

During my second year, I volunteered in South Africa for two weeks to deliver a Cycle to Success programme in a deprived school. The main aim was to teach all 29 students to ride and maintain a bike to increase accessibility to education. The team and I also delivered a leadership initiative using sport including football, netball and rugby as well as classroom-based teaching. From this experience, I learnt a lot about the South African culture through the students and teachers, including a Zulu dance that I show off to my friends in England all the time! I also made some amazing friends through this experience who made this trip such a success. Being a Student Ambassador

Being an ambassador has provided me with some of my best memories at Leeds Trinity, especially through working with some of the other ambassadors that I’ve become good friends with! I’ve particularly enjoyed working on the widening participation initiatives such as the reward scheme residentials as I’ve always been passionate about empowering young people from underrepresented communities. In this role, I’ve also had the opportunity to represent the university all over England at UCAS fairs, which also allowed me to visit parts of the country I’d never seen before.

During college, I began volunteering for football’s leading charity on diversity and inclusion where I formed part of their youth advisory group. In this role, we made recommendations to the organisation on how best to engage with young people and also assisted with external events such as delivering an interactive workshop at Old Trafford for Black History Month. The team and I also got allocated some funding to plan an event, which we delivered in Shoreditch. This involved watching the screening of the community shield game, a barbecue and a workshop on Islamophobia within football.

From volunteering with Kick It Out, my passion for equality and diversity grew even more. Using this passion, I organised a 5-aside tournament in my community for underrepresented groups in football, which led to engagement with over 70 athletes. Furthermore, this sparked interest in various media outlets such as Radio Leeds and BBC Look North where I interviewed live to raise awareness on the lack of representation of Muslims in football.

From my volunteering experiences collaborating with stakeholders in the sport, I received paid opportunities to work with the Muslim Women's Sports Foundation and Sporting Equals, which focused on engaging with different communities. When I was younger, I probably would have said something like being the Head Sport Psychologist at a club like Manchester United but I’m unsure now as there may be something that exists that’s perfect for me that I just haven’t discovered yet!

Make the most of all the opportunities you get offered as you never know what you could learn from it or who you may meet. Like they say, sometimes it’s more important who you know!